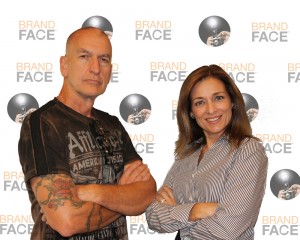 Rough exterior, t-shirt, tattoos and a flip phone (yes, a flip phone-just to be rebellious). I’m greeted warmly by Bob Juniper, one of the most controversial figures in the collision repair industry.  His appearance sets a tone reminiscent of Pawn Stars or Rick’s Restoration—tough and talented—and his impressive facility and team are extremely high tech.  In the early 1990’s, Bob began one of the most controversial marketing campaigns in collision repair history.  He owns Three-C Body Shop in Columbus, Ohio, and is known nationwide for his strong stance against the ‘Preferred Shop Programs’ which allow insurance companies to control auto repair.  His strategy positions Three-C as Central Ohio’s Direct Repair Alternative.  He doesn’t mince words when it comes to his complete distaste for most insurance companies.  In recent years, his daughter, Jade (now 14), has become a recognizable voice and face of the brand as well.  Her interactions with her Dad have provided some educational and humorous moments in their radio commercials.  I’ve admired Bob’s approach for years, and was grateful to get a look inside his brain in this BrandFace™ Star of the Week interview.

When and why did you decide to go after the insurance companies in your marketing strategy?
My Dad taught me quality workmanship.  When you do a big job, you have this big box of bolts that go with the car.  And if there was a bolt left over when the job was completed, he’d make me figure out where that bolt was supposed to go.  That kind of workmanship was just instilled in him and as a result, I grew up with that mentality.  So when the insurance companies started their ‘preferred shop programs’ aimed at directing work to the cheapest shops (not the best), they were presented to consumers as among the best shops.  But realistically, they couldn’t keep their shop open without these insurance company programs.  Over time, these preferred shops really didn’t have the option to say no.  They fed off the insurance companies and didn’t develop their own customer base.

When and why did you decide to be the face of your business?
We started advertising around 1992.  We were getting mediocre results.  It was worth doing the advertising, but not outstanding.  Then someone asked me if I would consider voicing my own radio spots.  He suggested it would represent credibility and accountability.  That way, my customers would know who was ultimately responsible for the quality of the work.  I bought into that concept.

How has being a BrandFace™ helped you…and hurt you?
Back in high school, I was not a sports jock.  I came into the body shop every day after school to work.  The school even cut me a special deal and allowed me to work at the family business instead of attending tech school.  So I was a decent body technician by the time I graduated from high school.  I feel like I ran ahead of the curve for quite a while after that.  I was always the youngest guy doing a variety of things in the industry.  It also made me feel better about myself, improved my self-esteem.  When I became the name and the face of the business, I became recognized.  Now the sports jocks come into the shop saying “Do you remember me from high school”?  And I think, “Yes, of course, you’re the one who gave me a wedgie”.  The success also helped me prove to my dad that I was worth a damn.  He always told other people he was proud of me, but he never told me.  Until the day he died, I never heard it from him.  But he had to see it in the success, so that goal was satisfied for me.  As far as how it’s hurt me, there’s some loss of privacy, but I’m not the kind of person who minds that.  My daughter, on the other hand, doesn’t always like it.

What kind of feedback do you get from the public?
It’s 99% positive, and 1% negative.  The one percent almost always has some tie to the insurance industry.  Mostly I hear things like, “I love your ads.  Every word is true”.  People from other body shops tell me how much they love the ads.  Even adjustors say, “Now, I’m not going to admit I said this, but your commercials are pretty much true”.

How do you see Jade’s role in the company moving forward?
I think there’s a good chance that she becomes involved in the company, but at this moment she’s keeping her options open.  She’s done summer camps here at the shop, though she doesn’t always like the work.  It’s loud, and she doesn’t like the chemical smells.  She’s done office work, answering phones and accounting.  She’s interested in architecture today, and who knows?  Maybe she’ll do both.

What’s next for Three C Body Shop?
We’re pushing our pink button app—we think it’s the future.  The app signals the tow truck right away, along with a rental car.  And the next time the customer sees their vehicle, it’s fixed.  It doesn’t get much simpler or easier than that.  No loss of time, no worry or stress.  We handle it all.  And we respond in 90 seconds.  Beyond that, we think we’re set up pretty well for robotic repair.  We’re the first in the market to take that step, and we feel it’s the next step in the future of cars and repairs.  It may take a while to get here, but when vehicle robotics does arrive, we believe it will happen quickly and it will be affordable.  And we’re already making progress toward that end.

Who do you most admire in business?
I’m reading Steve Jobs’ book right now.  I like his way of thinking about the importance of design.  He was pretty cool.  I always liked Ted Turner, too.  He’d always say, “Early to bed, early to rise.  Work like hell—and advertise”.   His method apparently worked.  Locally, I’d have to say Cameron Mitchell, with his themed restaurants.  Every concept was perfect, and he knew how to surround himself with a great team.

Was there a mentor who inspired you or your marketing strategy?
There was a local radio guy who inspired my marketing once the strategy was in place.  His name was Tom Hughes, and he and I actually partnered for several years and brought this same marketing concept to over 100 collision shops across the country, including Canada and Australia.   I also learned a lot from a guy named Scott Johnson, who owned a used car lot around the corner.  He was a great salesman, and he taught me a lot about taking care of customers and business at the same time—a win-win strategy.

What role did your Dad play in all of that?
My Dad was a great person to observe.  He was not a great teacher.  He didn’t say, “Here’s how you do this”.  He’d just do it himself and I would watch, and I learned that way.  He taught me about work ethic.  He was the oldest of twelve kids.  His own dad left after the 12th child was born, which made him more of a father figure than a sibling.  When the Depression started, my Dad was 7, and when it ended, he was 17, very formative years.  Then he went right into the Army for ten years after that.  I grew up saluting my Dad more than hugging him. A tough military guy from the Depression era.   He was a good example, and luckily, I was a good observer.

How would you advise other high profile business owners to handle controversial campaigns?
I recommend controversial campaigns for everybody.  Almost every business has a similar issue as ours.  I’m a firm believer in niches.  You can either be a commodity or you can be a niche.  What insurance companies have done to all the other body shops is turn them into a commodity.  The only alternative is to create your own niche.

To what or whom do you credit your success?
I would give that to my parents because they were hard workers and survivors during the worst possible times.  Earning money is half of it, but keeping it is the other half.  I’m very frugal.  I turn my nickels over before I spend them, and I learned that discipline by osmosis.  Success takes sacrifice, too.  The whole family is affected.  I’d also say my wife has been a big part of my success.  There have been many eighteen hour days, and she has always hung in there and understood.

What’s in the future for Bob?
One of the things I’d like to do is spend a little more time coaching my people.  I’ve become a better coach over the years.  I have more patience and more confidence than I used to have.  I’d also like to experiment with taking more time off, maybe a month at a time.  I might be bored to death, who knows, but I’d at least like to try it.  The truth is, every day I enjoy coming in here to kick the insurance companies’ ass and make them uphold their end of the deal to consumers.  They owe them that.  It’s a challenge, and they’re a formidable foe.